After two weeks of running my Wednesday night “event” as a guild night, we’ve had a group of four both nights. It’s about the most difficult group to go, too. We’re not too keen on PuGGing Mists dungeons, since none of us really know the fights (I know, research time for me.)  3 would be Scenarios, 5 would be, well, a 5-man, and 6 would break up into two scenario groups, which would make Skype highly entertaining, I’m sure.  More than six and we start looking at raids with a serious eye.

But, we had four. Our first night, we tried to do Cata heroics with a Ret Paladin turned healer more or less for the evening. That didn’t turn out too well, though that might have been because we were trying to do Blackrock Caverns.

Last night, I asked the innocent question, “Do you guys want to try and do 10-man Obsidian Sanctum, I don’t have the Black Drake yet.”   I didn’t know if we could, to be honest. I only know that four mediocrely geared level 85s struggled with 25-man.   There was discussion about whether anyone else could roll on the mount, to which I said, “of course! And we can come back next week, to get more.”  So off we went. And boom. Dead dragon. Mount reins to be rolled on. Jackoby passed, but Yawondergirl and Phink both rolled as well as, you know, me. The one with 128 mounts.  And I won! Woohoo. We took a picture of our first little success, with everyone on their “spiffyest” mount. 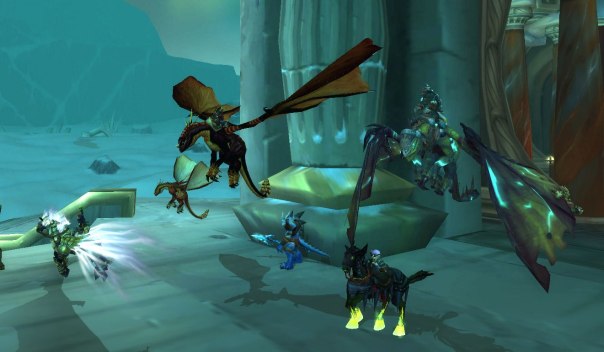 Once we’d done that, I asked the others if they had their Red Protodrakes yet. Jackoby and Yawondergirl haven’t even started the acheivement, and Phink still had several to get, so… off we went to Coldarra to start putting a dent in those acheivements.  We came out of the Nexus with a full round of completes, except Chaos Theory, which we stuffed up by killing Anomalus before he opened a chaos rift. Oops!  At 90, getting Intense Cold is actually pretty easy – at least with four people.  Up to The Oculus to start in on those achievements. We opted against taking Green drakes for our first run through, and we even picked up Make it Count on our first run through even though we weren’t even trying. Phink did fall off his Bronze Drake, so he’ll have to do that one again, but Jack and Yaw both picked up the tick-marks for their red drake riding skillz.

Once we were done there, it was back to Dragonblight to do Azjol Nerub, netting us a full clear of achievements there, and Anh’kahet: The Old Kingdom. I stuffed up remembering Volunteer Work until after one volunteer had been killed, but otherwise, we got another complete set.

Since it was getting late, we finished off the night with a run to Violet Hold – the first of what I’m sure are many, and ticked off Defenseless as well as Xevozz and Moragg tick marks for Lockdown!

Of course, with all those frozen orbs piling up at my feet, I collected enough to get mount # 130, as well…

Yes, that’s a Fury Warrior on a Flying Carpet. Whatcha Gonna Do ‘Bout It?

It Really Isn’t All About Me!

Tonight we had a foursome for the Laid Back Dungeons. JD Kenada took a break from judging the Transmogolympics to join us, and Mrs. Amateur came along as well. Our fourth was Tyl, whose full name I would butcher if I tried. (Ok, I tried. Silly me, I got offline before I wrote it down.)

The plan was to start with Utgarde Keep and Pinnacle, which we did. Giving Gurdrid all the achievements, and also giving Tael Incredible Hulk. After that, we were planning to head to Dragonblight, but Tum talked us into going to Occulus instead. Everyone was game, since we all needed achievements there.  On our way through, we stopped in at the Violet Hold, picking up two more of the required six bosses for Gurdrid’s Lockdown; but sadly not picking up Either A Void Dance or Dehydration since the bosses weren’t there to be fought.

We were unable to quickly dispatch the Ley Guardian for Make It Count but we did get both Ruby Void and Emerald Void by all riding Bronze drakes. Sadly, Tum and Gurdrid did not pick up the Bronze drake for Experienced Drake Rider because we’d taken too much damage during the fight and weren’t on our drakes when he died. So there will be trips back into the Occulus to finish that up.

Since we were there, we dropped down into the Nexus, Getting Split Personality in what may well have been the fastest time ever. I think  I clicked 2 buttons, so less than 5 seconds from start to finish? We tried to get Intense Cold for Tum and Tael, but an inopportune freeze made another miss there.

Tum, Tael, and Tyl all picked up mog pieces, as well.

Posted in Laid Back Dungeons