This is my seventh installment of the 20 Days of WoW Blogging Challenge.

The reason behind your blog’s name

Tiny WoW Guild is somewhat self-explanatory.  I am the guild leader of not just a small guild in WoW, but a tiny one. The difference, in my mind, is about scope.

A small guild is often a lean raiding or PvP guild. One that is built with just enough players to maintain a roster for whatever end game activity the group plans to pursue.  A small guild of this type may only have 10-15 members, but it’s by design. Social guilds, however, can be utterly huge; yet a common size seems to be around 100-200 members.

Higher Authority, however, has fewer than 20 member players. Of those member players, I know at least one who isn’t playing WoW at all right now, four who play primarily on different servers, and two who primarily play in their own vanity guild. While we are closing in on 60 toons, they’re mostly alts.   There are some others who are sort of MiA, but since we don’t make any requirements on anyone’s time; there’s no reason to remove them from the guild.

I figured, in all honesty, no matter what happens, I will always run my guild like a tiny one. And it probably won’t grow into anything bigger than a small guild.

This is my sixth installment of the 20 Days of WoW Blogging Challenge.

Since I work in a bank, I can’t show you my work desk. It’s a pretty standard short-wall cube affair, though. With a couple of pretty significant differences:

But let me show you where I play WoW: 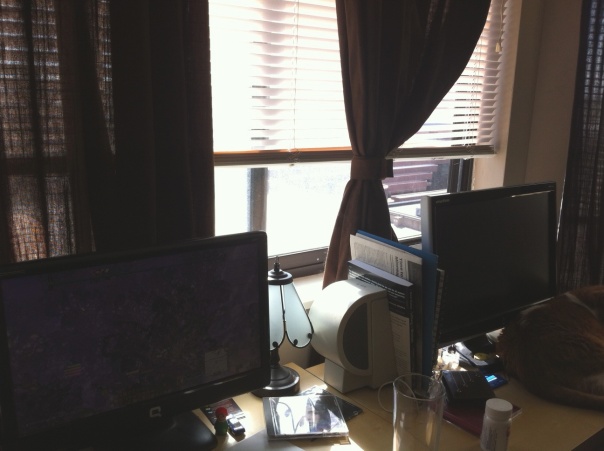 I sit on the left

That’s Sona’s PC on the right. It really is two desks, but they’re just wide enough for our towers and our knees.  The cat on Sona’s desk is Leia (pronounced Lee-ah, not like the noteworthy princess).

And here’s the view out that window. Sadly my phone can’t take pictures to do it justice. 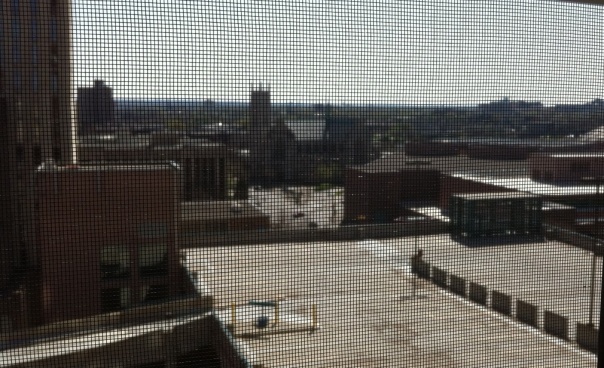 11 Stories up, you can see for about 2 miles on a sunny day

This is the fifth installment of the 20 Days of WoW Blogging Challenge.

This is an interesting one, which is actually difficult for me. I don’t tend to covet items (though that might change as I get more interested in transmogrification); I am a mount collector, and pet collector to a lesser extent; but overall, items are flavor for playing a game… so I’m going to change the name of it for a bit of fun:

Most Notable Item(s) in Game For You

There, that’s much better.

Yesterday, I talked about the Lawbringer Boots. And how I saw so many drop before I got my own, and how they were what completed my Lawbringer set.  Ironically, when I took Shoryl (II) to Molten Core to get her the Lawbringer set for transmog purposes, the boots were the last item she got. Suthine got at least three pair (those were the ones he linked to me when he was doing it) in his own instances locks before I got mine.

There’s also the Reins of the Albino Drake, which I had coveted since I knew they existed. I’m honestly a little sad that Blizz didn’t make the model notably smaller than the other drake models, as it would be a beautiful reference to Anne McCaffrey’s White Dragon. Shoryl is the proud owner of an albino drake, though Taoiseach never did get one.

Since I’m a mount collector, another one I’m quite fond of is Ashes of A’lar. Which, of course, have not dropped for me. Oddly enough, I had a moment of elation when the white chicken did drop. Until I realized is wasn’t ashes. Sonaira has her Pheonix Hatchling now, though, so maybe I’ll get the Ashes eventually.

I’ve wanted a Sulfuras, Hand of Ragnaros since vanilla, but I haven’t quite worked out how to solo Rags on Gurdrid. Shoryl and Sona can two-man it, but we’ve got nothing else to run the whole huge instance for any more, now that Shoryl has her set.  Oh, wait, there’s a rep in there…

Shoryl (the first one) carried a rabbit’s foot for quite a while. I had this notion that it might be an Easter Egg of RNG love.  I think I got rid of it right around the time of the 8th or 9th drop of Lawbringer Boots…

There’s also the Zhevra mount, which I got when Sona and I recruited her parents into the game.  I ended up giving the mount to my warrior because I didn’t think Taoiseach (then Shoryl) would get much use out of it, since paladins still had to quest to get their epic mounts, so they were becoming rarer.

I made my first “fortune” on theSuper Healing Potion. That was the first time I broke 10,000 gold, which was a lot more than it is today in BC. Sadly, I’ve never been able to reproduce the consistent sales of those things.

This is the fourth installment of the 20 Days of WoW Blogging Challenge.

This one is by far the easiest for me. During Vanilla, it was considered impossible to PuG raiding. 40 people had to be coordinated. Gear was not easily obtainable without a solid group, and the rare set gear (often called Tier 0) for more than one class wasn’t actually the stats you needed. The paladin set, for instance, had strength on it in a time where paladins were healers in raids.

Karih (the friend who sold me the computer…) wanted to raid. He’d transferred to Thunderhorn from a PvP server (Archimonde, I think); levelled an alliance warrior, and convinced me that we could actually put together a PuG. It was just a matter of recruiting people, he said. And so, we began. We set up a website for our guild, with a special section for the raiding team we were putting together. We ran 5, 10, and 15-man dungeons. When we had smooth groups, we invited people to look at the site, and consider joining us.  We had set ourselves a target date one month from when we started to recruit. In those weeks there were also several BRD runs to get the folks who wanted to join us attuned. That helped with interest, as we took whoever we could get to help out with it, not always people we’d already recruited.

About a week beforehand, we spent a couple of hours each evening hawking it – we were short healers – priests in particular. And as the day grew nearer, we found we had a waiting list for rogues and mages, as well as enough of every class except priests. I fretted. Karih tried to calm me; but it wasn’t until opening night, as he sat in Ironforge hawking and I sat next to the entrance of Blackrock Spire, both hunting for priests. It came to time to start invites, and he started sending out the invitations. It was a slow process, inviting 40 people who may not yet be online. The minutes counted down. We were still shy a priest.

I was in Blackrock Mountain, showing people the way to get into the Core. Watching their gear as they went by.  So many greens. I knew that we really wanted a lot of people in blues, and Karih and I were worried; but we’d take anybody who could get in the instance, really. A few people had fire resistance gear – I was in almost all green gear – I had one blue, to be precise. But I had above average fire resistance.

It was time to start, and we’d been hawking and bugging people in the raid to see if anyone knew a priest. Finally, Karih asked if anyone knew a druid. One of our rogues had a druid alt, and we had a rogue online and on the waiting list. We made the swap, promising the person who swapped that we’d give his rogue priority next time.

We all stood in the instance. Or hopped, or danced, or ran around. And Karih stood quietly in front of everyone, two molten giants looming like bodyguards behind him. He asked the warriors to step forward, and he checked over their gear while he explained how to pull and kill the trash. He whispered me in game, telling me that the very first pull might be a telling factor – the group wasn’t geared for this. We’d never run all together. He wasn’t sure we could do it.

He picked his off tank, called two hunters more or less at random to misdirect onto the tanks, and we started. We managed to get one behemoth down, but Karih died just before we changed targets, and his behemoth was running amok through the healers, then on to the DPS as none of the other warriors were quick enough to pick it up. Karih yelled at us through vent to run through the portal, and we did. A few folks didn’t make it, but there were some of us with resurrections who made it out. He called us back in when the second behemoth reset.

We pulled and killed the second behemoth without diffiuculty, and then looted. On our very first kill ever in Molten Core, we got our very first epic. The warlock wrists dropped. We had explained the loot system several times, including on the boards; but in the heat of the moment, we felt it was important to explain again. Four warlocks rolled on the loot. I noted the winner, Karih passed him the gear. We continued, explaining how to do each type of fight we would encounter. We wiped on trash more than once, but that Epic made it real for most of us. We were raiding.

The trash up to Lucifron was slow. Over an hour into our three hour run, we stood in the little alcove as Karih carefully explained the fight, and everyone’s role. He explained how important getting the curses and other debuffs off quickly was going to be. That it was our first priority as paladins and mages. He stressed killing the adds first, and called on his two chosen tanks for those. He told everyone it was likely we would wipe on our first attempt, that it didn’t make us bad, only inexperienced.  And he called for the pull.

I healed like I never had before in that fight. I spammed my decursive button when it was called for. My Lay On Hands was put to good use, saving Karih as the second add fell. With only Lucifron left to die, we had more healing power for him, and our mages and healers worked nearly nonstop to keep him alive while our DPS plugged away slowly at his health. And then it happened. Lucifron fell to the ground. We finished decursing; and Karih looted. I had to pull my headset off. Vent was so loud! But at the same time, I couldn’t believe it. We’d not only killed Lucifron, we’d one-shotted him.

The Lawbringer boots dropped that night. I lost the roll. I would see 10 more pair of those boots before I got them myself – which would finally complete my set.